Flights to Catania: that’s why!
• A combination of sun, a peaceful and pleasant atmosphere, and culture
• The still active Mount Etna volcano
• Rocky coasts, beaches, creeks, vineyards, mountains and so much more
• Taormina, with its rich historical and artistic heritage
• Shopping in Catania

Catania, on the east coast of Sicily, is the perfect destination for a beach holiday combined with culture and nature. It is lovely to sunbathe by the azure sea, and towns and cities such as Catania and Taormina are excellent places to visit on an excursion. The king of the region is of course Mount Etna, which towers over everything else. Book your flight to Catania now and come explore the region!
Search flights 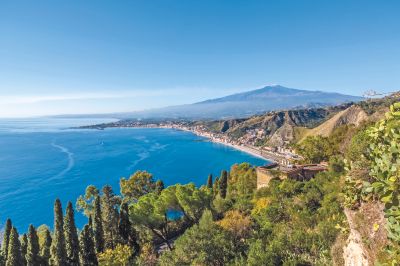 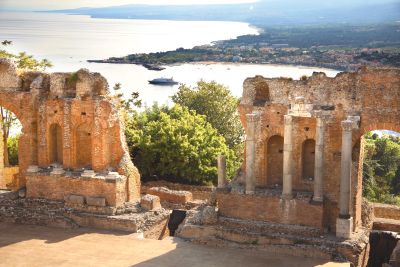 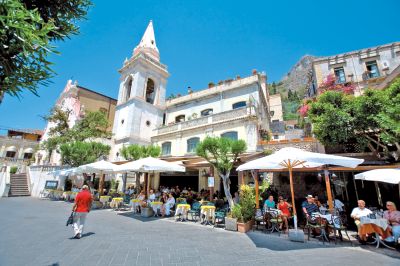 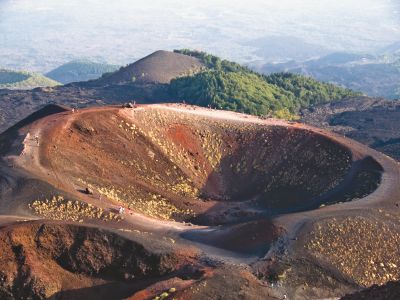 Tips for your stay in Catania

In Sicily, you can immerse yourself in history. A good start is Syracuse: originally a Greek colony which developed into one of the most beautiful and richest cities by the Mediterranean Sea and now one of the most impressive sights of the island. On this archaeological site, you stroll along a Greek theatre, Byzantine tombs, a Roman amphitheatre and on top of this the mysterious Ear of Dionysius.

Villa Romana del Casale is a Roman villa near Piazza Armerina, a good drive inland, where you can marvel at some unique mosaics. They can be found in almost any room of this luxurious villa, and they belong to the best-preserved mosaics from the Roman era. Listed as a UNESCO World Heritage Site, and rightly so! Reason enough to book your flights to Catania now…

Mount Etna, Sicily's main symbol. By car or bus, you can drive up to a height of 1,900 m, where you can visit the volcano’s extinct Sylvester craters. From there, you can go by funicular or jeep to get even higher, or you can go on foot. About 3 kilometres above sea level, you will in any case enjoy a breathtaking view.

Volcanic, authentic, relaxing … Lipari, Vulcano, Salina, Filicudi, Alicudi, Panarea or Stromboli: take a pick from the seven Aeolian Islands and be amazed by the black lava beaches, the traditional villages, the remains from the Roman era and the therapeutic sulphur mud baths.

The picturesque village of Taormina has been visited by movie stars like Marlene Dietrich and Elizabeth Taylor. The town is located at a height of 225 metres, on a rock with a beautiful panoramic view of the sea. The centre is largely pedestrianised and Corso Umberto, the cosy main street boasting numerous shops, is lovely to stroll along. Just outside the centre of Taormina is the Greek theatre that was rebuilt by the Romans and was used for gladiatorial fights. Many shows and festivities are still organised here, including the annual film festival.

With a flight to Catania, you will enjoy the beautiful landscapes and panoramic views. You can go to Parco dei Nebrodi, a protected, hilly nature reserve with rich vegetation. The park is home to several old villages, an adventure park and is of course laced with hiking trails.

You can also marvel at a spectacular natural phenomenon near Taormina. The ice cold water of the Alcantara Gorge allows you to cool down on hot days. The beginning of the gorge is a wide stretch of rocky riverbed with cliffs of volcanic rock. It is lovely to paddle in the shallow water; daredevils can venture further into the gorge.